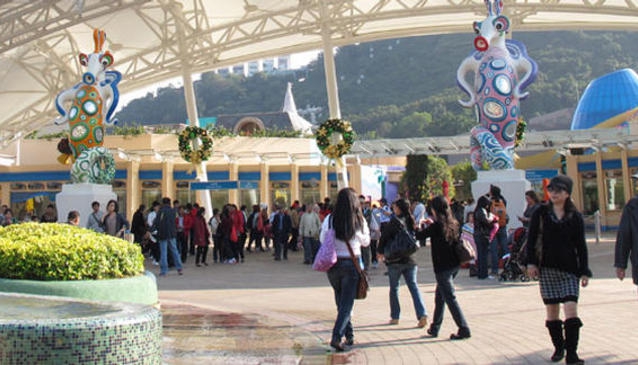 Built by the Hong Kong Jockey Club, Ocean Park Hong Kong is the world’s largest oceanarium overlooking the sea. It has also been recognized as the World’s Seventh Most Popular Amusement Park and 33rd Most Visited Tourist Attraction in the World by Forbes.

Ocean Park Hong Kong is for the whole family as it features attractions both for entertainment and education. The theme park is divided into 2 areas namely the Waterfront (Lowland) and the Summit (Headland). You will be welcomed in the Waterfront, and you can go to the Summit through a cable car ride that lets you enjoy the view the South China Sea, or through Ocean Express - a funicular railway where multimedia effects simulate the experience of undersea voyage.

The Waterfront boasts of the following themes:

The Summit boasts of the following themes:

Aside from the above attractions, Ocean Park also has daily entertaining shows held at different parts of the park. Some of the most famous are Emperors of the Sky - featuring different species of birds, Ocean Theatre - a show starred by the most talented dolphins and sea lions, and Whisker’s Theatre - the best show for kids. You may check Ocean Park’s website for the show schedules.

Free admission to children under 3 years old, seniors above 65 years old with HKID and to holders of Registration Card for people with disabilities.

Tickets can be bought from Admiralty West bus terminus before boarding Bus 629 and in the main entrance of Ocean Park.

How to get there: Take the MTR Island Line, get off at Admiralty station through Exit B. Ride Bus 629 to Ocean Park. Fare is HK$10.6.

Nearby attractions are the Stanley Market and Aberdeen which are both a 10-minute bus ride away.