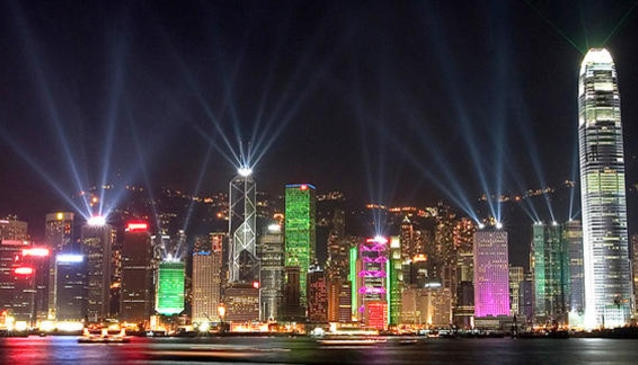 A Symphony of Lights - Hongkong

Directions to A Symphony of Lights

Crowned by the Guinness Book of World Records as the World's Largest Lighting and Music Show in 2005, A Symphony of Lights will not disappoint.

A project by Hong Kong Tourism Commission, A Symphony of Lights is a famous laser lights and music show facilitated by 44 skyscrapers on Hong Kong Island and Kowloon Peninsula, the opposite sides of Victoria Harbour. These skyscrapers are responsible for the vibrancy of Hong Kong around the harbour at night.

Included in the top 3 night views in the world together with Hakodate, Japan, and Naples, Italy, A Symphony of Lights show is comprised of five themes that when rolled into one, produce an energetic vibe.

The music and narration are aired from Avenue of Stars in several languages depending on the day of the show. During Mondays, Wednesdays and Fridays, the show is narrated in English. During Tuesdays, Thursdays, and Saturdays, it is aired in Putonghua, and on Sundays in Cantonese. There is also music playback via radio stations along the harbour. The best times to watch A Symphony of Lights are during special holidays like Christmas, New Year, and Chinese New Year as there is a fireworks show accompanying the Symphony of Lights Show. After watching the show, head to the best nightlife in Lan Kwai Fong (Hong Kong Island) or to the shopping malls and street markets in Kowloon Peninsula.

How to get there:

Golden Bauhinia Square - Take Hong Kong MTR to Wan Chai Station Exit A5. Walk across the footbridge, go right and pass through the lobby of Central Plaza. Continue across the linking walkway. Get down to the ground level and walk towards the waterfront. It will take you around 15 minutes.