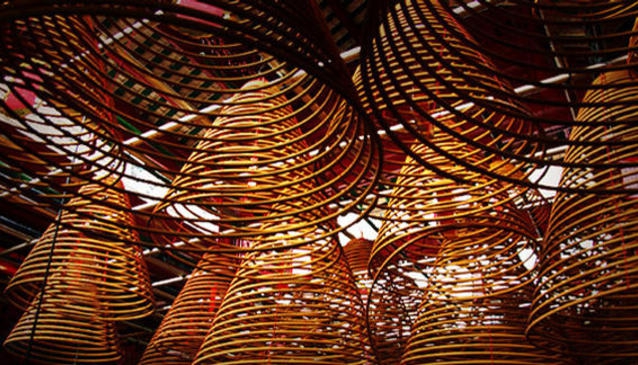 As if being the oldest and most famous temple in Hong Kong wasn't enough, Man Mo temple still had to be the most beautiful temple as well. The temple, located at the intersection of Hollywood Road and the Ladder Street, is a place of worship for two gods. These two gods are Man Cheong, the god of literature and Mo referring to Kwan Yu, the god of war. Man is depicted with a writing brush which obviously represents literature while Mo is depicted with a sword as used in wars.

Historically, the temple used to be popular during the 1900s as an alternative way to solve disputes when natives didn't prefer British law. It was said that both parties that are in dispute would write on a piece of yellow paper both a promise they would make to the temple & a punishment in case of non-compliance to the promise. After doing so, they would decapitate a chicken and let some blood drip onto the yellow paper. The papers were burned as a symbol of the promise being made before the gods and those who do not fulfill the promises they gave would incur the punishment they indicated.

In modern times however, this practice is no longer being used. The temple is more or less a place of worship where people burn incense in hopes of attracting the god's favor. Tourists can say their prayers here or they can also avail of fortune tellers' services in stalls located close to the temple.