What are you looking for?

Tell us what you're looking for...
Want to Run Your Own
My Guide Website?
Find Out More

It's a mixture of ritual, culture, and buns, all against a backdrop of banging drums and gongs

The Cheung Chau Lucky Bun Festival, held annually on the small outlying island of Cheung Chau, just a ferry ride away from the city, is truly funky, quirky to the core. Also known as the Jiao-festival (literally “go away” in Chinese), the Bun festival has been celebrated for over 100 years, and is quickly becoming an essential thing to do when visiting Hong Kong. The festival’s origins lie in that beautiful place where cultural heritage, history, and folklore meet. According to legend, the plague that swept the island over a century ago during the Qing dynasty was stopped by the performance of rituals, which continue to this day. These include parading the deity’s statues through the streets and setting up special alters to the god Pak Tai, to drive off evil spirits. Nowadays, residents, tourists, and passers-by alike celebrate and give thanks to Pak Tai for protecting them, by burning incense at special alters, eating vegan buns each stamped with the Chinese symbol for “luck” on them, and attend the Piu Sik (Floating Colours) parade at this Hong Kong attraction.

My experience as a Westerner attending the Bun Festival was incredible. Aptly named one of Time.com’s “Top 10 Quirky Local Festivals,” it is a mixture of ritual, culture, and buns, all against a backdrop of banging drums and gongs. My journey to the land of the Lucky Buns began at Pier 5, Central, where I had to choose between the regular or “Fast” ferry. Realizing that the Fast ferry was about double the price (HK $35.30) and only 15 minutes faster, I opted for the regular ferry. The hour-long ferry ride is an outing in itself, especially cruising through Victoria Harbour, gradually watching the skyscrapers slide past and slip away, being replaced by green islands and rolling blue waves.

A tip: Think Staten Island Ferry. The second deck had one row of seats facing backwards, which gave me an open, unobstructed view out the back of the ferry, the best in the house for a photo op. 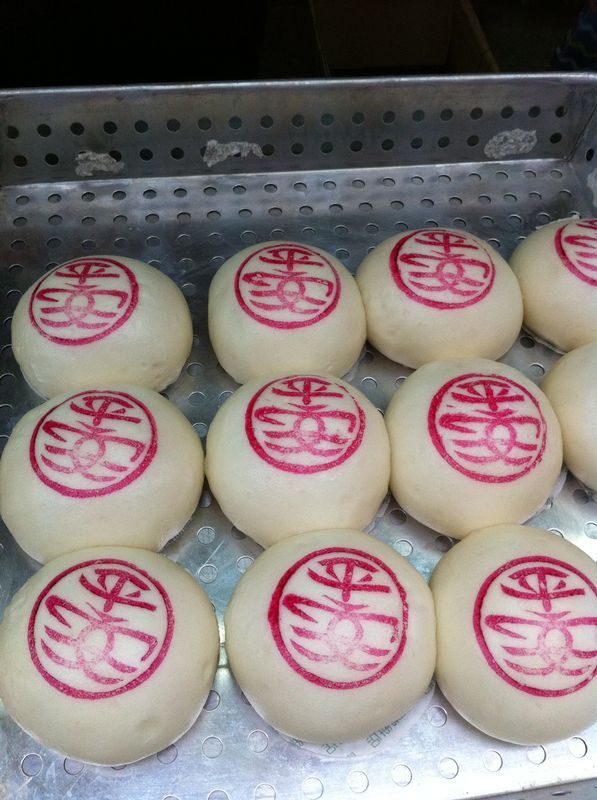 Out the left side, I spotted our normally sleepy destination, with fishermen’s colourful boats bobbing in welcome. A quaint little island whose lifeblood is the sea that surrounds it, boats and old-school 1970’s bicycles far outnumber cars. Life is slower, rolling with the waves and tides of the sea. Today, however, the island is whirled, clanged, and climbed to life, with crowds of merrymaking celebrants all over.

I made my way down one of the main streets by the water, trying to imagine what this place would normally look like. Makeshift tent extensions of shops, outdoor seating in restaurants, and stands selling everything from fresh fruit kebabs to Lucky Bun souvenir key chains were all erected for the occasion. Not wanting to miss one of the main events , the Piu Sik, or “Floating Colours” parade, I hurried to the ending point, the main square. Each deity is paraded through the streets by a different ‘team,’ each of which dons a different coloured, festive t-shirt. Akin to the dragon boat races, it is part parade, part race, with the deities being returned in a swooshing blur of colour as bearers run past, banging gongs and (sometimes) doing dragon dances, each one urged on by the cheering crowds.

Next comes the procession of “floating” children, which, by optical illusion, appear to float above the ground in their traditional garb. While each is unique, all are aimed at scaring away evil ghosts and spirits who wander the island.

As the parade drew to a close, I turned my attention to the grand temporary exhibitions that made up the main square. Adorned with colourful flags, there was a stage, where Cantonese opera was being performed, next to an alter billowing with smoke from giant incense sticks and three separate open-faced tents displaying the traditional Bun towers. The large ones resembled Native American tipi (teepee) construction, conical in shape, hollow in the centre; only these were about 15 metres tall and covered with actual lucky buns. 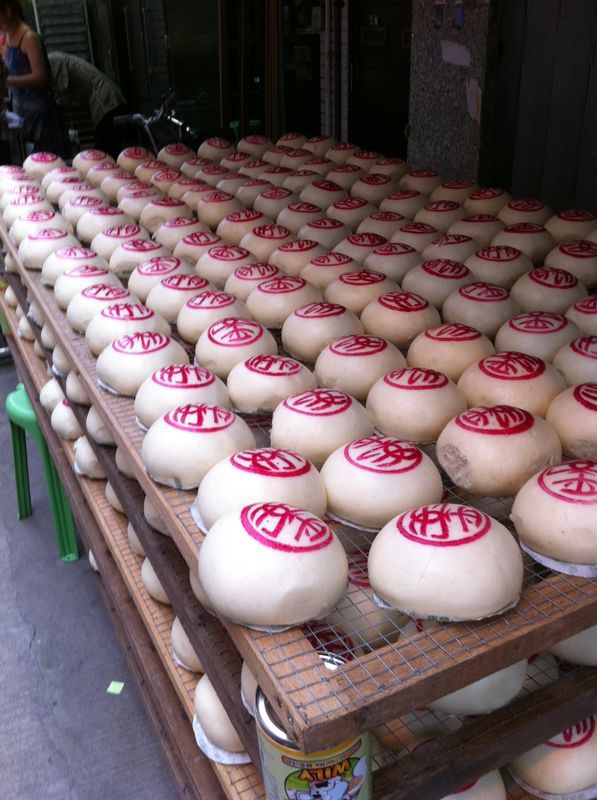 I made my way back through the twisting, narrow alleyways, following my nose that would lead me to the prized Lucky Bun stands. The lines were enormous, but the scent of freshly baked bread wafting from the kitchens mingled with the clang of the twirling lion dances that make their way, “eating” the offerings of lettuce hanging outside shops made for an entertaining wait with people-watching galore. Finally making my way to the front, I saw buns everywhere, in all phases of their process – dough being kneaded, people bringing metal trays of freshly baked plain buns out of the oven, retrieving trays from cooling racks, stamping (literally!) the buns with the red “lucky” Chinese character, and being basketed, boxed, and eaten on the spot. I learned there are three types of fillings for this occasion: sweet red bean, sesame, and lotus seed. While I had sampled the previous two in other dishes before, lotus seed paste was totally new to me. Initially suspicious of the greenish colour, the sweet, caramelish, light paste was delicious! Tip: buns are much more filling that they look! You will most likely be full after only one.

After my doughy delight, I wandered the streets, discovering trendy, funky little shops , sampling seafood specialties that the island is known for, and popping into a local supermarket for a drink, which I sipped sitting on the sand looking out across the darkened ocean at the lights of Hong Kong twinkling in the distance. An hour away brought me to a whole new world.

At midnight came the pinnacle event of the festival: the Bun Scrambling Competition. The goal is to grab as many of the prized buns at the top of the Bun Mountain as possible, to bring your family luck and food in the coming year. Think of it as rock climbing, except the holds are buns! Because of safety issues, the current climbable version is complete with safety climbing harnesses, and they use plastic buns instead of real ones to recycle. A whistle blew and the Bun tower came alive, people scrambling and scurrying like ants up a tree. The winners were ceremoniously declared, and fireworks erupted from the bun mountain, finishing with a glittering explosion of confetti amid thunderous applause. An epic finale to a century-old festival, and a priceless glimpse into folklore and tradition.

How to get there: Take the ferry (either “Fast” 45 minutes, HK$35, or regular, 1 hour, HK $18) from Pier #5 in Central. It departs roughly once an hour, but check the time schedule, as the schedule for this holiday is different. 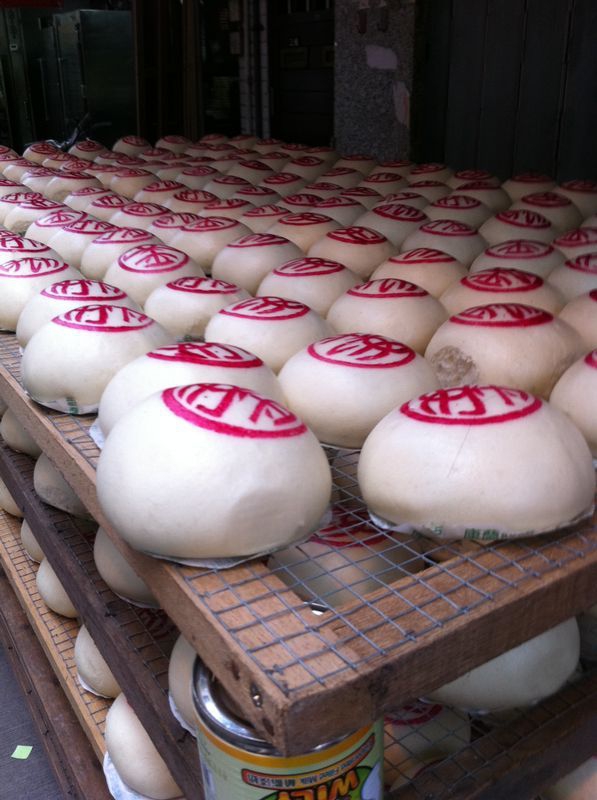